Peter's approach 'in his own words' 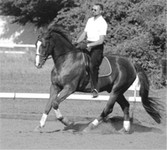 If I were to sum up my philosophy of training and working with horses it would all be based around the following three quotations.

“The complicated part about training horses is the simplicity of it.”

This phrase has been ringing in my ears for over twenty years. Once casually said to me by one of my mentors it has become the guideline I adhere to, especially when faced with what initially appears to be a problem.

Horses are complex creatures, but on the other hand if the rider or trainer takes the time to learn their behaviour, instincts and reactions, gaining the animal’s full co-operation becomes relatively straight forward. Developing your horse into a willing partner within the training system is vital. To do this we have to learn how to work with his natural activities and conduct and not against them. 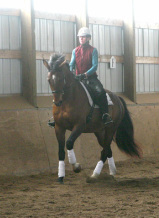 “If it works it can’t be wrong. But if it doesn’t work it’s not right.”

Famous old Yorkshire saying that has also become part of my work with horses and riders. Sometimes we may not see the reason why something we have done has worked. Instead of merely accepting this it is easy to over analyse and end up complicating matters. Conversely if something is not working then it is prudent to change tactics quickly. However, human nature being what it is we are often lured into repeatedly trying to make something work for our own sheer bloody mindedness.

“The wise man will leave his ego at the gate to
the arena and not get involved in such arguments.”